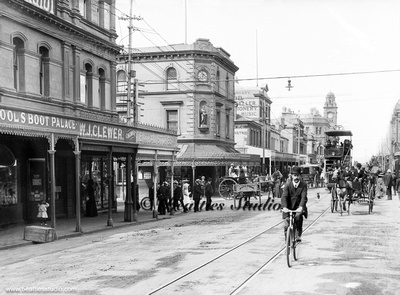 According to Wikipedia, "Rephotography is the act of repeat photography of the same site, with a time lag between the two images; a "then and now" view of a particular area."

With the Beattie’s Studio collection, rephotography means taking Beattie photos again to show how things have changed and what is there now.

My Grandfather, Arch, was a bit of a pioneer of rephotographs, taking new versions of Mr Beattie’s photos. Recreating the scene from the same view point years later. I think Arch was trying to show the changes over time, but probably also trying to do a better version of the photo, given he had better technology. Now I’m planning on doing that.

I've decided that my first book will be of the Hobart Town collection with "then and now" photos, history and other interesting facts. This book will be about the original photo, the scene, the place, the story of the place. But also about the story of rephotographing it.

As a warm up to the book, I've been out rephotographing some of the sites. Scoping them out. Watching the light, the timing and the traffic. Doing my homework, you might say. I was out on Elizabeth Street, just outside Banjo's to be exact, scoping out number 771 from our collection. This is the classic "Man on the bike" photo. It's the one that really started it all for me. The first one I ever digitised. It's the reason (well one of the reasons) that I'm doing this. I just love that photo. So there I am, watching that I don't get run over by a bus and trying desperately to get the shot to line up on the screen of my iPhone. I use an app called Repro which superimposes the original shot over the live camera. That makes it easy to find the exact spot and the right angle - in theory. What they don't tell you is that no one can see an LCD screen in full sun, not even Superman. Right on 1pm (the time on the clock in 771) a cyclist rides up Elizabeth Street exactly in the spot where the man is in the original photo. I was so shocked that I was a bit late hitting the shutter button and missed the perfect photo by half a second. It makes a great story if not a great photo. 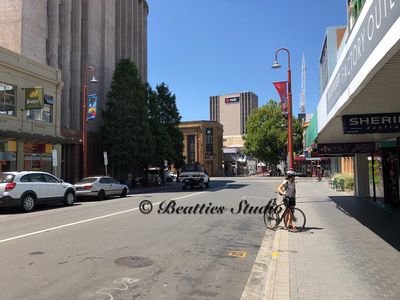 Elizabeth Street todayWhat are the odds a cyclist will come along almost exactly 100 years later in the same spot at the same time of day when I'm "ready" to take the photo again?