Numbers are interesting things. Most of our photos have numbers. They don't have much else to identify them, no names, no descriptions, no locations and certainly no metadata. Most have a four digit number hand written on the paper bag they are stored in. Mostly the number is also written on the negative too. So that's what you get - 4 lousy digits to distinguish thousands of lovely images from one another.

3647 is an interesting number. No, it's not the combination to my high school locker. I can't recall what that was, yet it seemed so important at the time. No, 3647 is the number of images in the Beattie's Lightroom catalogue. That is where I keep the digital master versions of our photographs. So in theory I've done 3647 out of 5000 negatives in the historic collection. Given 2016 was a bad year on so many levels, I'm pretty happy with that number. I believe I said this was a 5 year project and that number says I'm on track for a 2018 finish.

It's probably not appropriate to go into too much detail of all the pot holes in that track, let's just say they were significant and plentiful. What's more interesting is the journey down that track. And I can assure you that's a more interesting story.

One diversion was the scanner. I still get better results with my archival camera, but I needed a scanner for colour work. I do get people needing reprints of their weddings, portraits and other photos Beattie's took for them over the years. Many of these are in colour. And colour is really hard to get right. With all your fancy digital cameras and really smart software, you've probably never had to work with early colour film. And what a little bugger colour film is.

It all comes down to compression. That's the process of taking a lot of information and squashing it down into a small storage space. Your digital camera does that by taking lots of colour picture information and squashing it into a small jpeg datafile. And it does that really, really well. Even a cheap camera does a pretty good job of that and makes the process so simple that it's invisible to you and you've probably never thought about it. When it comes time to viewing the photo, a computer un-squashes the jpeg and produces a wide range of colours that looks so close to the original image that you are happy. You never think about how closely those colours resemble the original scene. Like I said, even a cheap camera can get this bit so very right.

Analogue film cameras are pretty good a squashing down the colour information. They store it on a piece of plastic film using a photo-chemical reaction. And this is where my problem starts. All of that highly compressed colour information appears to my eyes as a piece of orange coloured film. I can't see any colours in there. The whole thing is just a shade of orange; 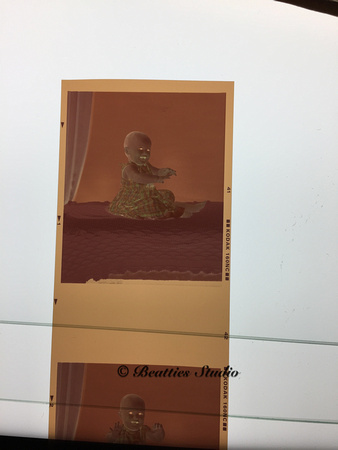 I don't know about you, but for the life of me I can't detect any "colour" in this other than orange. Possibly the background curtain is blue and there's some green in the dress, but it's like one of those silly 3D pictures, you can stare and stare and some people just get it and some people do not. When it comes to colour negatives, I just don't see it.

With black and white, I just invert the blacks and whites (using a tone curve, black becomes white, white becomes black) and the negative un-squashes into a photograph. It needs some contrast adjustment, but basically it's a photo. With colour, I have to invert Red, Green and Blue (RGB) which doesn't sound too bad until you realise that each colour layer has its own compression and that's not a linear process. Oops, I just used a bunch of big words. Sorry.

Un-squashing colour negatives into an exact match of the original colour photo is hard, really hard. Each batch of film was different and you would need hundreds of adjustments and you might not get it right after all that.

So I bought some really expensive software that specialises in this complex un-squashing of colour negatives. It's called Silverfast and it's very good at what it does. The software itself is a right bugger to learn because it's very German. All the translation is literal. There is no manual. The training videos are done by very talented, German engineers who wrote the software so they know exactly how it works. They will tell you that the "achtung-o-meter" controls the achtung of the image, for example. Well WTF is that? The user interface was designed by ... no, just kidding, it wasn't designed at all. It was thrown together. In short, the software is God-awful to use but does a brilliant job.

So, in learning how to process the colour negatives in the Beattie's Studio collection, I spent most of 2016 just getting a grip on one piece of software. See, I told you it was an interesting pot hole.