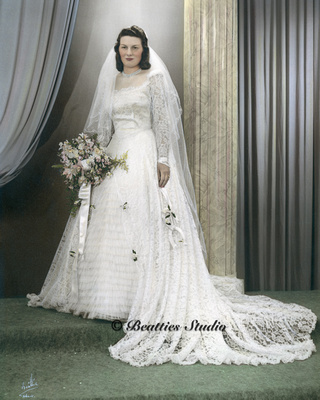 My wife and son found this photo at the Tip Shop. This beautiful framed photograph in perfect condition with no damage at all. Given the style and fashion, I estimate this to be 1950-1970. In truth, if I had the man power, I could search the old hand written registers and probably find out whose wedding it was. But I don't and that isn't the point. Back in the day this was taken, colour photography was far from perfected. The colours were often not accurate and the images tended to fade over time. Your beautiful wedding photographs probably wouldn't look so great by your golden anniversary. The chemical process just wasn't great. So despite colour photography having been around since about 1907 (and allegedly made popular by Hitler) it was not used or recommended for weddings at the time this one was taken. The photographers preferred to take black and white images and have them coloured by an artist painting the colours onto the photo. (hand coloured) The colours were more accurate and the photo lasted a lot longer. This one is probably well over 60 years old and the colours are still as bright as the day it was taken.

Several people worked very hard and used all their skill to produce this photograph. The bride, the dress maker, makeup artist, hair dresser and attendants (maids, as in bride's maids). All of these people got the bride (up 3 sets of stairs) to the studio looking just right. Then the photographer (and in this case I am pretty sure it was A A Stephenson) had to capture that look. He put the bride at ease, posed her and used his charm to get the right expression and look. He used his technical skills to capture that image on a negative whilst looking under a hood (a large cloak to shield the light) at the image upside down on ground glass. Then another technician in the dark room (probably William Stephenson) had to use chemicals and light to develop the negative. And yet more skill to produce the print onto paper. Then the colourist (and I'm guessing Miss Heather Brown did this one) went to work, based on fabric samples, notes etc. (She wasn't at the wedding, and had never seen the dress, complexion, flowers and makeup, so how would she know what colour to paint them?) And then a picture framer had to mount the picture onto stiff cardboard, seal it with a varnish and frame it.

The sad part is that this bride and all her family are possibly long gone. I'm guessing there was no one left that wanted to keep this photo.

So my son bought it with his pocket money (a whole $5) and brought it home. Mostly because his grand father had taken it. And I scanned it and present it here. Because it doesn't belong on the tip.